A teenage blogger from Singapore has applied for political asylum in the United States after being detained last week at Chicago’s O’Hare International Airport.

Yee, detained December 16, was at the McHenry Adult Correctional Facility, an hour away from Chicago. His U.S. attorney, Sandra Grossman, said Yee was arrested because he entered the country on a tourist visa despite his intention to apply for asylum.

Rights group Human Rights Watch called on Washington to recognize Yee’s asylum claim, saying Yee had been consistently harassed by the Singapore government for publicly expressing his views on politics and religion and criticizing Singapore’s leaders.

The video blogger aired a piece full of expletives last March as the city-state was mourning the death of Prime Minister Lee Kuan Yew. Singapore’s government said his posting mocked Christians and Muslims, and it argued that his jailing was meant to preserve racial and religious harmony. 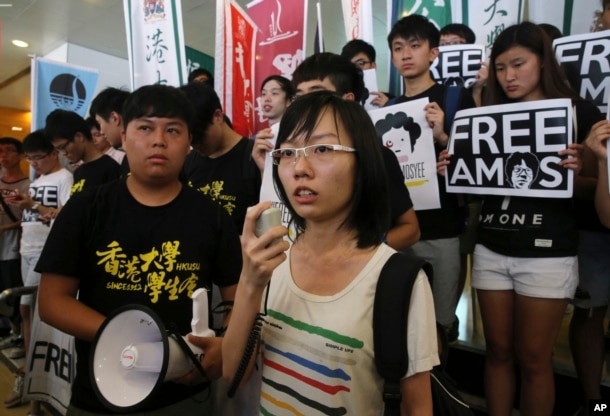 Singaporean protester Han Hui-hui, center, accompanied by Hong Kong students, speaks during a protest outside the Singapore Consulate in Hong Kong, June 30, 2015, to urge Singapore’s government to release teen blogger Amos Yee. Yee had been found guilty of insulting Christians in a video monologue, and of distributing an obscene image of the country’s founding father, Lee Kuan Yew.

Yee was jailed twice this year on charges of offending Christians and Muslims with his online activities. He is also due to be called up for mandatory military service.

Grossman, Yee’s attorney, said the teen would have to undergo an interview by an asylum official to determine whether he had “credible fear” of persecution or torture in Singapore. He would then be scheduled to appear before an immigration court, a process that could take years because of a backlog of applications.