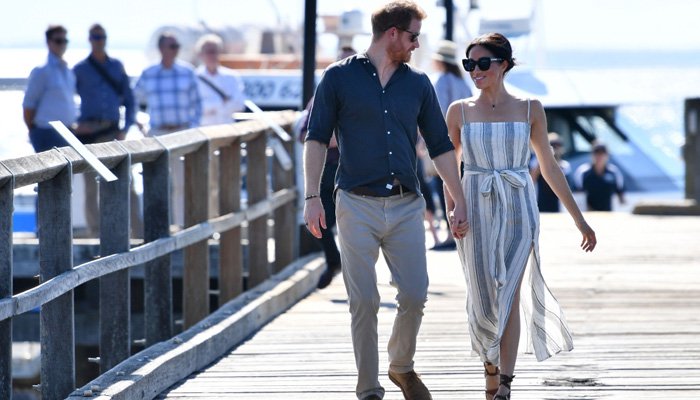 Meghan, the pregnant wife of Britain´s Prince Harry, emerged from her break from official duties Monday to greet excited fans on the stunning World Heritage-listed Fraser Island during the royal couple´s Australian tour.

The Duchess of Sussex skipped most of the day´s events on the island off Queensland state, after a packed tour that has seen the pair travel to Sydney, Melbourne and the regional town of Dubbo since touching down in Australia last Monday.

But she appeared in the late afternoon for a public meet-and-greet with her husband, delighting the large crowd at Kingfisher Bay.

Wearing a striped linen maxi dress with a thigh-high split, reportedly by sustainable LA brand Reformation, the pair walked down the jetty and received more baby gifts — including quilts and stuffed toys — from the locals.

One 16-year-old boy, who was carrying the sign “Meghan Markle you make my world sparkle” was so excited that he had met the Duchess that he forgot what she said to him.

“She was just really thankful,” he told news.com.au.

Earlier, the loved-up couple arrived in Queensland by plane before travelling to the island separately.

Harry boarded a barge, a route used by tourists to travel to the island, while the Duchess of Sussex took a different vessel and then retreated to a private residence.

Her choice of dress for the boat, a maroon number with white polka dots, sparked excitement in Queensland, as the deep brownish-red happens to also been the official colour of the state.

The Duke of Sussex then headed to the peaceful shores of Lake McKenzie, where he was greeted with a traditional Aboriginal ceremony from the local Butchulla people.

He later walked barefoot on the soft white sands of the lake, a source of drinking water for the Butchulla people, and splashed water on his face.

Fraser is the world´s largest sand island and the prince unveiled a plaque to dedicate the holiday site´s acres of rainforests to the Queen´s Commonwealth Canopy project.

It is the second time the plaque has been unveiled.

“The first time was by my father — The Prince of Wales — in Bundaberg earlier this year when he was visiting,” the Duke of Sussex said in a speech at the unveiling.

“I now have the privilege of unveiling it in situ… Luckily we are both highly skilled when it comes to unveiling plaques.”

The prince also received an unexpected compliment from one member of the crowd who yelled “he´s better looking in person!” according to news.com.au.

Taking a strong environmental interest, a cause close to his father´s heart, he met with park rangers to learn more about the island´s plants and animals.

He was also due to meet with two Hervey Bay paramedics, who are being recognised for granting a dying woman´s final wish by taking her to the beach.

A photo of a paramedic beside a stretcher facing the ocean was posted on Facebook last year and went viral around the world.

The pair are due to visit Fiji and Tonga after Fraser Island.